As a result of a 4 month reading of the text

the “group of Wednesday meetings” promoted a two day

of our work through performance and lectures.


This took place in Empros Theater in february 2015


The book of Judith Butler on Antigone escorted my

personal insight on the discussion, resulting in a

The performance challenged the transformation from the self

to the roles of Antigone and Kreon,

to finally end up with a reversion of the roles questioning

This transvertion gave an insight to the personality

of the acted persona diverting into the self and the other self,

equilibrating the opponent with the self..

A text widely discussed by philosophers and modern thinkers

examines the clashing of ideas in the dipole

resulting in a crushing with the characters

The performance took into account the space of the theater,

bringing the argument in the now of the present,

aiming to circulate the audience and raise the question of

personalization of the actor to the self and impose

a greater question of what is ethics in an argument

where both is right, especially by the Anuil reading.

Posted by maria zacharogianni at 3:38 PM No comments: 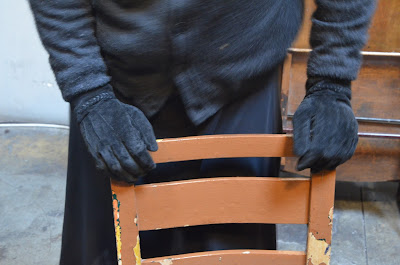 Posted by maria zacharogianni at 2:23 PM No comments:

Email ThisBlogThis!Share to TwitterShare to FacebookShare to Pinterest
This aims at questioning identity, alieneity and belonging.  In antiquity Greeks were not only the ones who were born instate but all who had received Greek education
“Atlast Kreon!!” or “Kreon left his shoes at the square”

Part 1 Agelina = Agelina and Samir= Samir
Aaaaaaaaaaaaaaaaa pause
A but why is the window open in the kitchen??
S: Also I know of pain
A: there are two pigeons out in the balcony staring at me
S: I passed the Boarders to come and see you
A: And the moving chair I can hear form the corridor as if a cat is settled upon it
S: the scars are still visible on my body from the tortures
A: the pot is whistling I prepared it for you to come and visit me
S: I respect myself
A: can you get the knife oh! Look how it trembles with the light
S:I respect my past
A: the neighbor form first floor is every day driving me mad with her mumbling
S: M people are crying out for freedom

Part2 Agelina = Antigone and Samir = Kreon
S: I am God!
A: the summer time I like to sit on the balcony and listen to birds
S:I am Nature! Earth is my creation! Where were you?
A: I can’t find you.  A lot of birds feather as if angry they escape the palace
S: The sea, the ship, a lot of ship,s they all wait for my call
A: I cant hear you I can’t
S: They all take their force from me
A: vo vou voooo I am stone
S: Nature the environment takes its strength form me
A: you always take another route
S: the stars nature they all shine for me
A: Look we are in a theater
S: You and I in the same space
A: look how many watch you look how many
S: you and I may not exist in the same space
A: red black yellow shoes pause b-r-o-t-h-e-r
S: Grave living grave
A: I see you let your hair dawn
S: I told you I am God!
A: You walk and breath from your shoes
S: Blood a lot of blood look how much blood
A: where do you put out your cigarettes?
S: Which God made you?
A: Kronos ate his children! Judge me you gay prick
S: I am yourself
A: your hands five fingers on one palm five on the other
S: you are a man I am a woman
A: Cut your hands from the wrist from the shoulder
S; You breed
A: cut out your tongue from the root so not to speak
S: Two bodies one mind
A: Giannos Euterpi Rasid Eleni Nikos and Ismene are all at the square and wait for you, where you left your shoes, you red hills
S: I am right. I am the law
A: Who put you on those illuminant dresses. Who gave you these beads?
S: some day we will depart from this earth
A: Who gave yu these dresses you wear?
S: I stand across you
A: Touch my cheek
S: I am the center of the earth
A: I win
S: You win. I win!
A: You win.
Part 3 Agelina= Kreon and Samir= Antigone
A: The entire city saw you running in the wheat field on you own Antigone
S: I see dreams a lot of dreams
A: I am the law. There is no place for dreams here.  They are too large
S: Yellow everywhere
A: I am the law I am a bull I am the death of the square
S: (In Arabic) there is god inside each and one of us
A: At last Kreon
S: I will always be God
A: it is snowing outside
S: I am….?
A: Who left the window open in the kitchen??
S: Even the dead can think

Posted by maria zacharogianni at 2:20 PM No comments: